Some languages (Arabic, Hebrew, Farsi ...) write the characters from the right to the left, and adequate support for this must be implemented on Lazarus.

Default of BidiMode, mean read and order is normal "Left To Right"

Makes a control Right To Left reading text and right alignment depend a kind of the control,

In Delphi if there is Alignment property effect by reverse taLeft to taRight and vise versa, but in Lazarus we will reverse the alignment with FlipControls function, that make more consistency with Anchors and Align properties. Also bdRightToLeft take a Scrollbar at the Left and if there is a Cells or Menus must ordered from the Right.

That mean not just a Right Alignment it is Right To Left Order. bdRightToLeft must effect the text reading as depend on the OS if it is supported, the sentence words take as like Cells

We are reading the Word1 first then Word2, We read from the Right to Left, but Draw Text is more complicated than normal Cells, in fact the function that Draw the text care about English/Latin words and draw it Left To Right, so if we mixed both languages in the same sentence the draw function drawing continual English words by Left To Right order to make it more readable, but a symbols like as ? or ! considered as Right To Left characters.

It is right to left but except Alignment property not reversed, but in Lazarus worked when use FlipControls

It is right to left text reading only, scrollbar and alignment is not take effect.

If it is True the control inherit BidiMode value from the parent.

When you build you own controls and try make your control support the right to left or BidiMode, you must not access the BiDiMode property directly, you must use

Because some controls not need to make effect to the alignment for example TButton it always is centered , or TMainMenu it always take Right align if it Right To left.

Not just reading the words and cells, it is every thing depend on the order (positions), for application there is a Menus and Controls that placed on the form it must have position from the right. 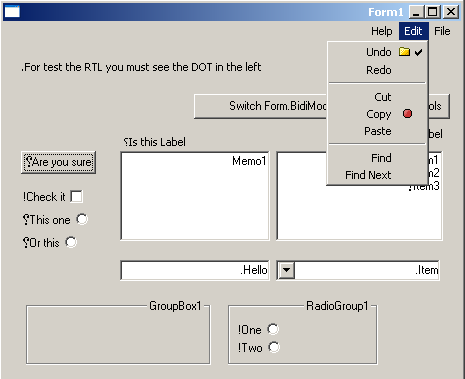 How to test RightToLeft reading

Create new form, then add TButton or TEdit set the caption to OK? you must add ? or ! or . to the last word with out space, now set the BidiMode to bdRightToLeft, you will see the ? in the left of word.

Design and Implementation of a Win32 Text Editor