You can add/remove code comments, via "Comments" plugin. Plugin is preinstalled in CudaText. It gives about 6 commands in menu "Plugins / Comments". Plugin supports only adding/removing of comments, not syntax highlighting for them (highlighting is lexer's work).

Macro is a sequence of CudaText actions, which can be saved to a file and invoked later by some command. To use macros, you must install plugin "Macros" from Addon Manager. It adds "Macros" menu to CudaText main menu bar. This menu gives items:

To record a macro:

Macro saves action(s) performed inside its original editor tab (not other tabs). And it doesn't save actions inside plugin dialogs (e.g. FindInFiles).

This plugin is preinstalled in CudaText. It shows panel "Project" in the sidebar (to show this panel, call plugin by any command, or set plugin's option "Load on program start" and restart, CudaText sidebar will have Project button). On the project panel, on its tree-view, you can add several "root nodes", each node must be existing file or folder. For folder nodes, plugin auto shows all nested folders. You cannot add nodes on other levels (like SynWrite editor does).

Plugin has context menu on its panel, with items:

Any project can have "main file", you can choose it in the context menu: "Selected file / Set as main file". Main file's path is used by plugin External Tools, when some tool is configured with macro {ProjMainFile}. This allows tools to run compilation of the main file.

To see the "preview tab", call "File / Open folder" and choose a folder with some files. Folder will be opened in the side panel "Project". Make single click on a file in this project, it will open in "preview tab". Single preview tab is shared by all clicked files in the project. It has italic font style of the caption (font style is customizable). When you begin to edit file in the preview tab, tab becomes "normal" and looses its special status.

Preview tab is always created in the first tab-group. Even if the focused editor is located in different tab-group. It was made so to avoid the situation when preview tab jumps from one tab-group to another. Preview tab can be dragged to another tab-group, it should work there too, it will show there all "previewed" files.

To use snippets you need:

Each snippet has a name (shown in the dialog when Snippets plugin is called) and short id (letters, digits, '_', dot). You can type id in editor and press Tab key: snippet for this id will be inserted into text. You can insert snippets also by choosing in dialog: call menu item "Plugins / Snippets".

Only those snippets are enabled, which are suitable for the current lexer. For example, a snippet may be for lexers "C,C++,Objective C" - it is enabled only when these lexers are active. If a snippet has no lexer property, it is always enabled.

Texts of snippets usually have tab-stop(s), e.g. ${1:some_text}. Plugin Snippets finds tab-stops and places "markers" for them. After markers are placed, Tab-key works special in editor, it jumps to next marker. See detailed information in the CudaText#Markers. 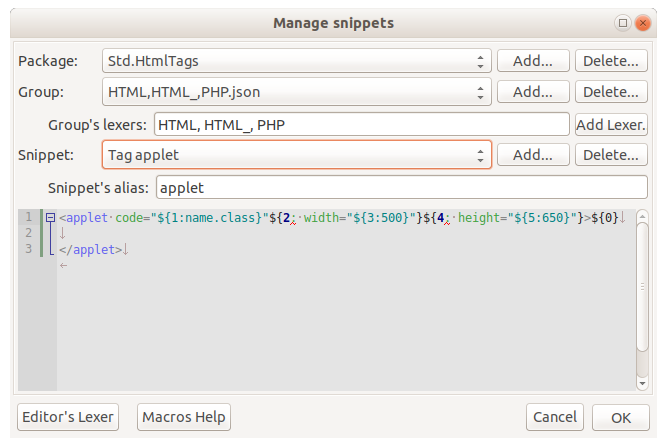 Currently most of VSCode/TextMate "macros" are supported in snippets body, but not all. Refer to readme file of the plugin.

CudaText has preinstalled 120+ snippets for HTML tags. (You still need to install Snippets plugin.) They are enabled with HTML lexer. Just type tag name without a bracket, press Tab, and snippet is inserted. E.g. "a"<Tab> will insert:

These snippets have markers, so Tab key jumps to the next marker. Last marker is usually placed after the entire tag, ie after ">" bracket.

This places markers (AKA tab-stops) in the editor, marker index NN should be from 0 to 40. After snippet insertion, tab-key goes to next marker(s) and deletes it.

Special macros are handled by Snippets plugin in snippet text:

The following macros from Sublime Text editor are supported. They can be written as $NAME or as ${NAME}.

For inserting the current date and time:

Snippets are stored in separate files with extensions:

Encoding is UTF-8, no BOM. Files can be placed in any subfolder of "data/snippets" folder, file/folder names have no meaning, but it's recommented to name subfolders like AuthorName.SyntaxName, so users can easily find newly installed snippets.

First lines have format "key=value" (no spaces around "="), where "key" is one of strings:

Then follows the line "text=" without value, and all next lines - are snippet contents.

File contains one or several lines, one snippet per line. Empty lines, lines starting with "#" or space, are ignored. Format of lines:

Plugin "Snippet Panel" is preinstalled in CudaText. It gives an alternative way to use short text fragments (only simple ones) in editor. It adds button to sidebar, and command "Plugins / Snippet Panel". When called, plugin shows panel in the sidebar, with a drop-down list of folders, which contain several "snippets". You can double-click snippets to insert them into text (multi-carets are supported).

Plugin looks for its folders in two places:

Each snippet folder can contain one or more .txt files, in UTF-8 (no BOM) or UTF-16 (with BOM) encoding. Files have snippet per line, in the form "name=value" or simply "name" (if value missed, it equals to name). Each snippet can be simple short string, or string with ${sel} macro to replace selected text. This allows to quote currently selected text by calling snippets from "Quote selection" folder.

CudaLint plugin allows to check correctness of documents in many syntaxes. It was initially ported from SublimeLinter 2.x plugin for Sublime Text. Each lexer must be supported with additionally installed linter, for example:

You will find all linters in the Addon Manager: "Plugins / Addon Manager / Install". Linters are installable like other plugins but they don't add commands, they only add folders "[CudaText]/py/cuda_lint_*", which are automatically used by CudaLint. After you install a linter, see readme in its folder, maybe how-to-use info is written there.

To run linting, use menu item "Plugins / CudaLint / Lint", or set hotkey to this command (in CudaText Command Palette, press F9). You will see statusbar message, which tells how many errors linter found. For each found error, you'll see yellow/red bookmark (you can use usual commands for these bookmarks). Plugin also shows list of errors in the "Validate" panel (to show Validate panel, click V icon on the CudaText sidebar).

Linting can also be run by events:

Events aren't used by default (to not slowdown usual work). To use events, you must enable them in config. Call config by menu item in "Options / Settings-plugins".

To support more lexers, it's a good idea to port linter from SublimeLinter. To port a linter, most you need is:

How to configure linters per project? In your project (Project Manager plugin), right-click root node of project treeview, call menu item "Project file / Project properties...". In this dialog, in the "Variablies" field, enter variable(s) like this:

Variable prefix "linter_" required, after goes lower-case lexer name (CSS). Value of variable must be name of linter's folder (in "py" folder) without "cuda_lint_". So if linter's folder is py/cuda_lint_aaa, specify value "aaa".

In this example, CudaLint plugin allows, for mentioned lexer CSS, only linter "csslint", even if another CSS linter (e.g. "csstree") is installed and found first.

CudaFormatter is plugin which uses 2nd-level plugins, "formatters", to change the source code. Each "formatter" supports one or more lexers, and provides one or more actions. For example, the Addon Manager contains two formatters for XML: XML IndentX and XML Pretty Print.

For example, how to format code in XML?

Formatters may change entire file text or only selected text. If selection is made, formatter changes only the selection, otherwise the entire text.

Plugin "External Tools" (ExtTools) can be installed from Addon Manager. It allows to run external programs, catch their output, and display this output in the Output/Validate panels of CudaText. Or to insert/replace some text in the editor. Plugin adds "Tools" top menu (near "Plugins"), it has item to configure all tools, and items for individual tools.

Some external tools configs are shown in topics below. Enter these strings in the "Tool properties" dialog.

The disadvantage of the plugin: it cannot show tool output lines immediately when they appear, it waits until tool is terminated. Consider to use the #Runner plugin which supports this.

Tool to compile by GCC

You can test how this tool works on any Linux, because GCC is preinstalled. Test the tool on C++ example, which is created from CudaText by menu "File / New from template / C++".

Tool is for Linux, so "File name" don't have an extension. For Windows, change "File name" field to "{FileNameNoExt}.exe".

Tool will catch the program output in the Output panel, program text input will not work.

Tool to run C program, on Windows, with input in terminal

Tool is for Windows, it allows to run compiled C/C++ program in new console window. Text input will work in this console.

Tool to run C program, on Linux, with input in terminal

In the External Tools dialog, press Join button, to join 2 tools created in above steps. Properties of joined tool:

Tool to compile by Free Pascal

Optionally, configure "Pattern", so double click in the Output panel will put caret to the source code. In the "Tool properties" dialog, press "Set" button near the "Pattern" and choose there ready preset for Free Pascal.

Tool to open PHP documentation with given topic

Tool to open PHP documentation, in .chm format, for the word under editor's caret. For Windows only. You need to install KeyHH from http://keyworks.helpmvp.com/ , it is stable tool mentioned on several sites. Program "keyhh.exe" will be in your system PATH.

Before making the tool, add "$" char to word chars for PHP lexer. To do it, call "Plugins / Options Editor", in the Options Editor dialog find option "word_chars" and set it to "$". You must save option to PHP lexer-specific config, so in the dialog you must check flag "For [x] Lexer", and choose lexer "PHP", and then write option value "$" and press Enter.

Download PHP documentation in .chm format from PHP.net, google for "php_manual_en chm", it is 16M file.

Tool to open AutoIt documentation with given topic

Tool to open AutoIt documentation, in .chm format, for the word under editor's caret. For Windows only. You need to install KeyHH from http://keyworks.helpmvp.com/ , it is stable tool mentioned on several sites. Program "keyhh.exe" will be in your system PATH.

With AutoIt installed, you also have .chm documentation, its path is usually "C:\Program Files (x86)\AutoIt3\AutoIt.chm".

Tool to open .chm documentation for all lexers

See above example about tool for PHP documentation. Create the similar tool

This tool needs renamed .chm files: for lexer AutoIt it needs "AutoIt.chm" and so on. It needs .chm files in a single folder relative to CudaText folder.

This is URL, not tool. In the External Tools dialog, press URL button, then press Add to add a new URL.

Tool to open folder of current file in Windows Explorer

Tool to go to current file in FreeCommander

Plugin Runner was written as an alternative to External Tools.

Many build-systems from Sublime Text 3 were packaged and put to add-on collection, search for add-on "Many Build Systems". Only few build-systems were packaged into own separate packages because they have big EXE/Binary files. Some ST3 plugins have build-systems paired with some Python code - they are not supported.

See the Runner documentation on GitHub.

Here is the GIF animation which shows reaction of Runner to PHP script running:

How to debug for example PHP file, with Runner. Create file "[CudaText]/data/buildsystems/php.sublime-build" with such text:

After opening a PHP file, call Runner main command "Build", that's it. It must show PHP script output (in the Output panel) line-by-line, as it appears.

FiF3 and FiF4: comparision and future