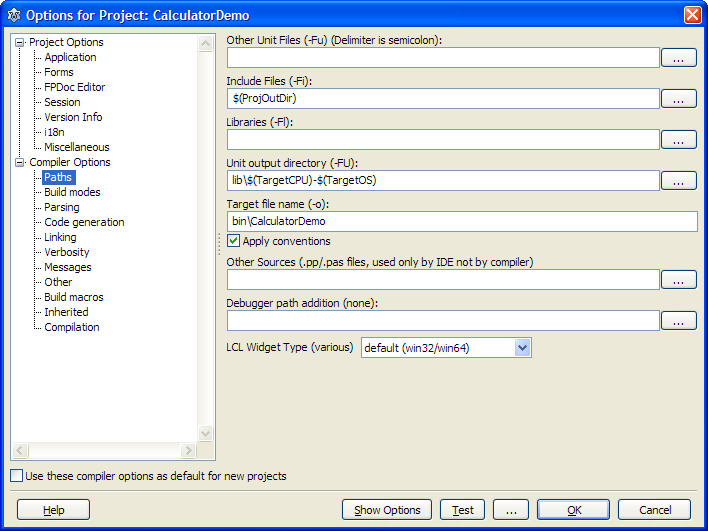 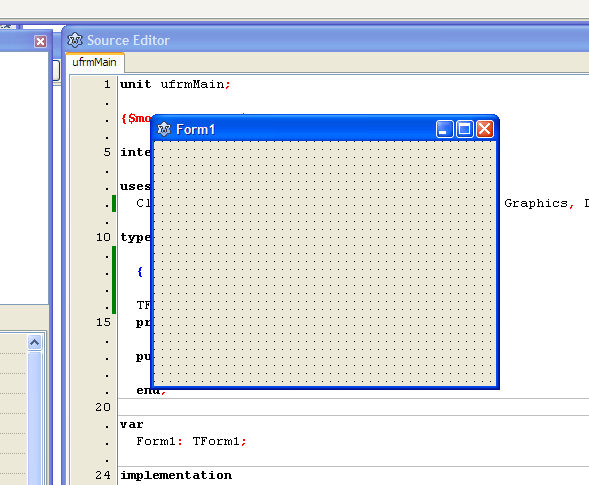 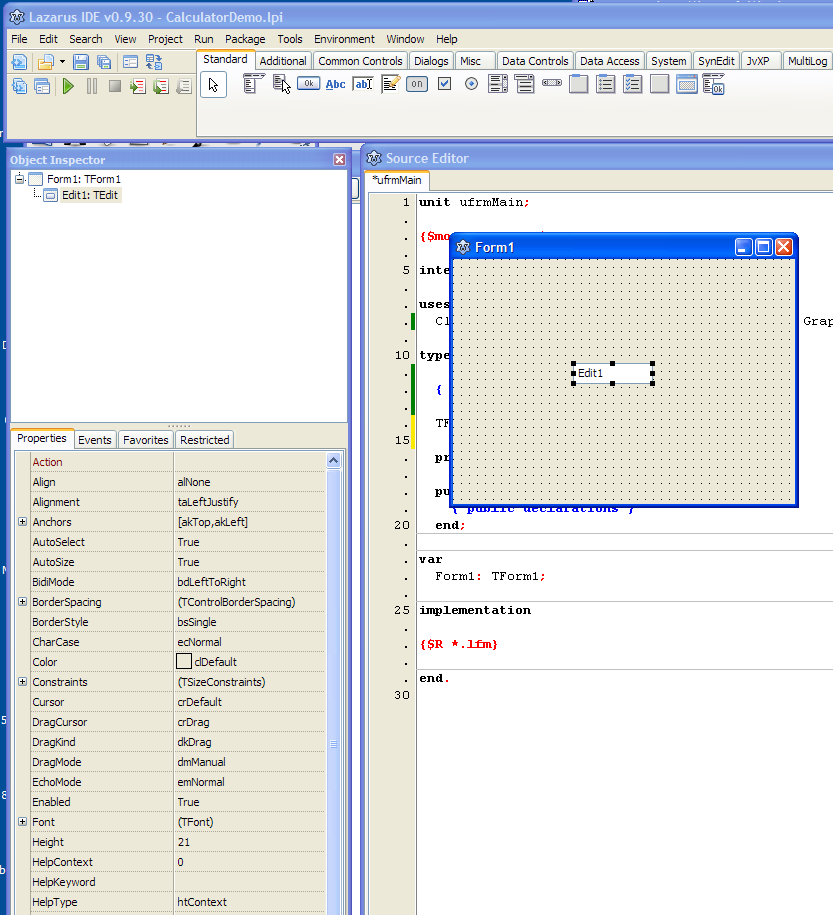 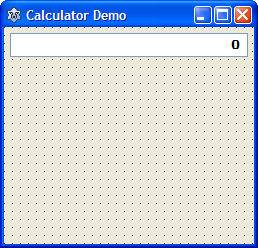 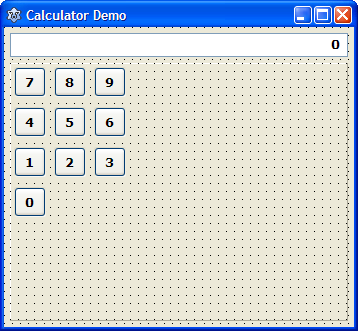 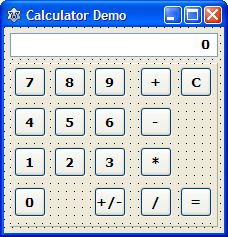 A gui application (often) is an event based application. This means that the application does nothing until we tell it to do something. For example by entering data via the keyboard, pressing buttons etc. One of the things the calculator needs to do is responding to mouse clicks on the buttons 0..9. This is where the IDE helps us. Adding a so called event handler for a button is easy.

<Delphi>edDisplay.Text := edDisplay.Text + '0'</Delphi> edDisplay is an edit box. The way to change the contents of the edit box is by modifying the Text property. The above statement adds the number '0' to the text in the edit box and this is visible on screen immediately.

It's a good idea to compile the code from time to time to check for syntax errors.

Of course it's now easy to add event handlers for the digits 2..9, but this will result in a lot of redundant code. Every event handler does exactly the same, only the digit is different. The way to remove this redundancy is by creating a procedure that does the processing, and add the variable data (the digits 0..9) as a parameter.

Back to our digits problem: we need a procedure that adds digits to the display, where the digits themselves can vary.

Next the actual code of the AddDigit procedure must be entered. Again the IDE comes to the rescue:

The IDE generates the definition of this new method and places the text cursor inside the empty body. We can immediately start typing.

<Delphi>edDisplay.Text := edDisplay.Text + IntToStr(pDigit)</Delphi> Note that function IntToStr() translates a numerical value, the digit, to a string value so it can be added to the display text.

Now to use this procedure for all digits 0..9:

Before completing this sequence for all other digit buttons, make sure that this actually does what we want.

Now we can add event handlers to digit buttons 2..9. But then again we have the same problem of creating a lot of redundant code: AddDigit(2), AddDigit(3) etc. What if there were a way to tell the buttons apart? Luckily there is.

All components have an integer property called Tag (remember: a control is just a special kind of component that inherits this Tag property). It is a property that has no actual function. It is there for us to use as we see fit. Now what if each button would have it's digit value stored in the Tag property…

Now all digit buttons have a unique Tag value. We didn't change digit button 0 because the default Tag value already is 0. Now to make use if this Tag value:

<Delphi>procedure TForm1.btnDigit0Click(Sender: TObject);</Delphi> The Sender parameter is actually a reference to the button that was pressed. Via typecasting we can use the parameter as if it was a TButton.

It doesn't look like we have accomplished much, replacing one line of code with another. However if we were to add the code for the other digits (1..9) it would look exactly the same. So all other digits can reuse this particular method!

Let's have a closer look at the Object Inspector. 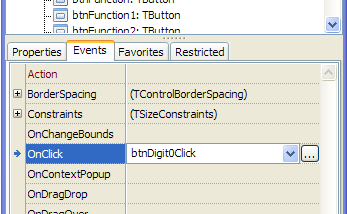 In the object inspector we can not only change the properties of a control but also the event handlers. In the Object Inspector we can see that as soon as digit button 0 is clicked, method btnDigit0Click is called (this is the OnClick event handler).

Now all buttons share the same event handler to add digits to the display box.

For the digit buttons one final thing needs to be done: event handler btnDigit1Click still exists but is not used anymore and should be deleted. The safest way to do this (for now) is to let the IDE handle it. For this to work the option Auto remove empty methods must be enabled.

From now on all empty methods are automatically deleted as soon as the source file is saved.

So far so good: the calculator program compiles, runs and responds to clicks on digit buttons 0..9. But it doesn't behave exactly as we want: there's always this annoying zero at the beginning of the number and the number of allowed digits is too large.

Normally an integer number that's bigger (or smaller) than zero does not start with a leading zero. So our calculator should compensate for this. Luckily this is easy to implement. Remember that we have one and only one method that handles the addition of digits: AddDigit. This is the place to add logic to suppress the leading zero.

Limit the number of digits

This demo calculator cannot handle numbers that are too large. So we need to limit the number of digits that can be entered. Again the logical place to do this is the AddDigit method:

Now it's time to look at the actual operations we want to implement: adding, subtracting, multiplying and dividing. The way the user is going to use the calculator goes something like this:

As soon as the user presses the '=' button the program has to know three things:

What was the operation?

Somehow we need to register that a certain operation type was selected. And for that we need to know what operation types are available. One way to implement this is to create an enumeration type (or user defined scalar type) that contains all valid operations.

What was the first number?

To temporarily store the first number that was entered we need a variable.

What was the second number?

Add variable SecondNumber to the form's private section (the same as FirstNumber) and make it a longint as well.

What's on your mind