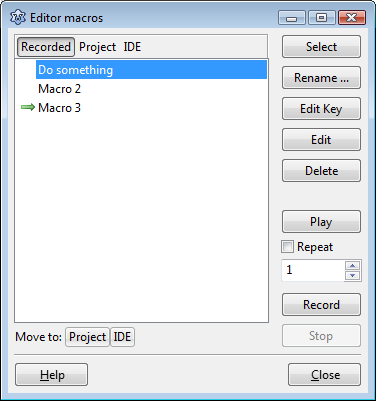 Lazarus allows you to record any amount of macros. Using the Editor Macro window you can select which macro is currently used. You can also save macros by moving them to the project session, or the IDE config.

Note: When editing a macro and then saving it, this will save it to the project (or IDE options) in memory. You need then to save the project. (Options are saved, if the IDE is closed). Not saving the project will loose the changes.

The macros are displayed in 3 groups:

Macros can be moved between Project and IDE

Macros can have a status icon:

Current macro. This can be set using the "Select" button. This is the macro that is played, if using the keyboard shortcut.

Broken macro. This indicates that the macro could not be loaded from the config. The macro can not be used. (It will be kept (in it's broken form) in the config)

Select
Set current macro which will be used by the keyboard shortcut.
The Play button is not affected by this.
Rename...
Rename the macro.
Edit Key
Assign a key-combo to the macro
Edit
Edit the macro as source
Delete
Delete the macro.
Play
Play the selected macro. This is the macro selected by clicking the list. Not the "current" macro.
Repeat
Set how often the macro is played. Only affects the play button. The keyboard shortcut is not affected.
Record
Record a new Macro.
During recording this button will allow to pause/continue the recording.
If anything was recorded, the new macro will be set "current" macro.
Stop
Ends the recording. The button also allows to stop repeated play. (in certain circumstances, it is possible to stop in the middle of a playing macro)
Move to
Project/Ide: Moves the selected macro to the indicated group

By Default the following 2 key shortcuts are set up:

During recording, the shortcut for play can be used to pause recording