This interface is based on Qt 5 (Qt 5.6.2 is tested). For documentation, fixes and download, go to Qt Project (Installers at download 5.6.2). Lazarus with Qt5 interface (qt5-lcl) can be used on Windows 32/64, Linux x32/x64/arm, MacOSX x64(Cocoa). Qt5 widgetset is available from lazarus trunk 1.7 rev. 53806 and will be available in lazarus 1.8 stable release. There's no support for 32bit Qt5 binary versions from Digia, so if you need 32bit Qt5 on linux you must build complete Qt5 on your own, including libQt5Pas.

Most current Linux distros have a suitable Qt5 in their standard repositories however, long term release versions such as Ubuntu 16.04 and Unbuntu 18.04 have an issue with their own libQt5Pas, wee below.

There is Q5Pas1.dll binary available.

If you need to build cbindings project, you need mingw. You can use mingw from Qt package (qt-opensource-windows-x86-mingw492-5.6.2.exe) - it's an optional component of Qt package installation.

For MingW based package the following set of DLLs would be required to run a single FORM project.

Builds made base on MSVC rather than MingW might have different set of (non Qt5) dlls required. Note that https://svn.freepascal.org/svn/lazarus/binaries/i386-win32/qt5/Qt5Pas1.dll is built against Qt5-5.6.2, but Qt5Pas1.dll can be used with any Qt5 > 5.6.2.

Lazarus, "out of the box" on Linux uses and makes apps for GTK2. It is not marked as having a dependency on Qt5 so if you wish to make Qt5 apps or build a Qt5 version of Lazarus you may need to install Qt5 and will almost certainly need to install libQt5Pas-dev. If you wish to use a Qt5 version of Lazarus, build from source with a command like "make bigide LCL_PLATFORM=qt5 <enter>"

From within Lazarus, to choose to build a Qt5 app, Projects->ProjectOptions->AdditionsandOverrides and click Set "LCLWidgetType", and select Qt5 for the current Build Mode.

A library that bridges between Qt5 and your Lazarus application. Newer distros have working versions available in their repositories.

Note that some long term release distributions, such as Ubuntu 16.04 and 18.04 have an incompatible version of libqt5pas (even though it appears to have the same version number as later distros!). You should build a new version of the library, everything you need is in your Lazarus tree, bindings sources are located in lcl/interfaces/qt5/cbindings , to build it just follow README.txt. Note that once built you can use that library in all (?) Qt5 installs (5.6 or greater) however, the libraries shipped with Ubuntu are not so portable.

Unfortunately, you cannot rely on the version number Ubuntu has stamped on their libQt5Pas to determine if it needs to be replaced or not. If you ship your application to Linux users, its quite likely they are using one of the LTR Ubuntus and will strike this problem. 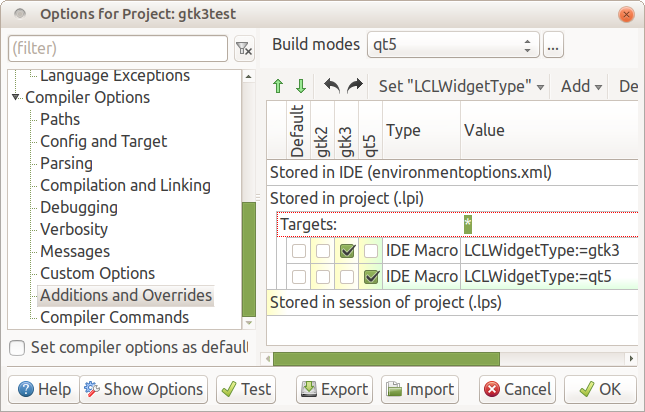 Good question ! Most Linux Lazarus applications are built using the default GTK2. The various Linux distributions are delivering less and less GTK2 apps, generally 'upgrading' to GTK3. However, the Lazarus GTK3 interface still needs some work and its not ready for production systems yet. Until late 2019, this has not mattered much, GTK2 works fine. But Ubuntu19.10 does not have GTK2 libraries installed by default and Xfce has announced its next release will be GTK2 free, apparently many distributions are looking to drop GTK2 from their default kits. While you can still install GTK2, its pretty big....

Remember that Qt5 is 64bit, so in Lazarus under Tools - Options - Environment, you need to change Compiler Executable from /usr/local/bin/ppc386 to /usr/local/bin/ppcx64 . With ppc386, you would later get the following errors when compiling your Lazarus projects:

See [1] for an example project.