SynEdit <-> Highlighter have an n to 1 relationship.

As a result of this:

The Highlighter is expected to work on a per Line base.

If any text was modified, SynEdit will call (TSynCustomHighlighter.ScanFrom / Currently called from TSynEdit.ScanFrom) with the line range. The Highlighter should know the state of the previous line.

If Highlight attributes are required, SynEdit will request them per Line too. SynEdit will loop through individual tokens on a line. This currently happens from nested proc PaintLines in SynEdit.PaintTextLines. It calls TSynCustomHighlighter.StartAtLineIndex, followed by HL.GetTokenEx/HL.GetTokenAttribute for as long as HL.GetEol is false.

Also the BaseClass for the Highlighter's data (see AttachToLines) is based on per line storage, and SynEdit's TextBuffer (Lines) do maintenance on this data to keep it synchronized. That is: whenever lines of text are inserted or removed, so are entries inserted or removed from the highlighters data (hence it must have one entry per line).

Usually Highlighters store the end-of-line-status in this field. So if the highlighter is going to work on a line, it will continue with the state-entry from the previous line.

The basic information for communication between SynEditFoldedView and the HL requires 2 values stored for each line. (Of course the highlighter itself can store more information):

The Foldlevel indicates how many (nested) folds exist. It goes up whenever a fold begins, and down when a fold ends:

the MinLvl is 0, because the line started with a Level of 0 (and it never went down / no folds closed). Similar in all lines where there is only an opening fold keyword ("begin").

starts with a level of 3, and also ends with it (one close, one open). But since it went down first, the minimum level encountered anywhere on the line is 2.

Without the MinLvl it would not be possible to tell that a fold ends in this line.

There is no such thing as a MaxLvl, because folds that start and end on the same line can not be folded anyway. No need to detect them.

Since 0.9.31 Revision 35115 the fold-highlighter has changed. Implementing basic folding is now easier.

All Sources can be found in the Lazarus installation directory under:

The folding highlighter in action: 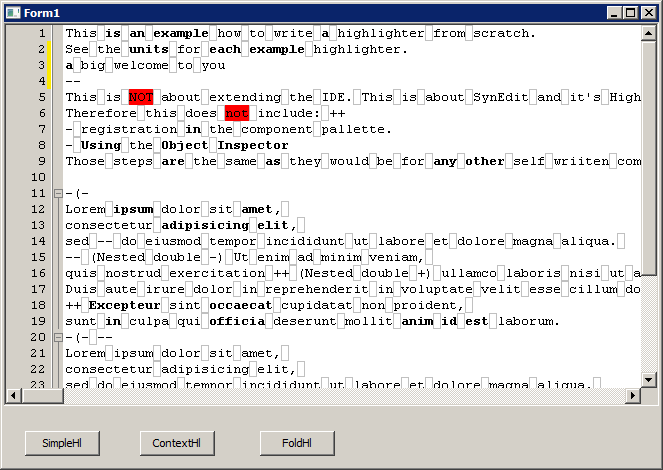 The Basics: Returning Tokens and Attributes

As indicated, the SimpleHl unit demonstrates this process.

The Highlighter creates Attributes that it can return the Words and Spaces.

Are used by SynEdit to iterate over the Line. Note that the first Token (Word or Spaces) must be ready after SetLine, without a call to Next.

Important: The tokens returned for each line must represent the original line-text, and be returned in the correct order.

SynEdit uses them e.g for finding matching brackets. If tokenKind returns different values per Attribute, then brackets only match, if they are of the same kind (e.g. if there was a string attribute, brackets outside a string would not match brackets inside a string).

For readability, the highlighter has no optimization, so it may be very slow on larger texts. Many of the supplied highlighters use hash functions, to find what word (or any group of chars) is.

As indicated, the ContextHl unit demonstrates this process

The next example allows content of a line that influences other lines that follow. An example: a "(*" in Pascal makes all following lines a comment until a "*)" is found.

This example extends the SimpleHl show above: The tokens -- and ++ (must be surrounded by space or line-begin/end to be a token of their own) will toggle words that start with a,e,i,o,u

Multiple ++ and -- can be nested. Then for each -- a ++ must be given, before the words highlight again.

Then we extend the scanner. The pre-scan to store the information calls the same functions as the highlighter. It is automatically called, if anything changes. (It is called for all lines below the changed line, until a line returns the same Range-value as it already had)

The current amount of "--" is counted in

The amount is decreased by "++"

To store the info we use:

Note: A scan is triggered by *every* change to a line (every keystroke). It scans the current line, and all lines below, until a line returns the same range that it already had. See: http://forum.lazarus.freepascal.org/index.php/topic,21727.msg139420.html#msg139420

As indicated, the FoldHl unit demonstrates this process

For the example, the highlighter should fold everything between free-standing "-(-", "-)-".

Change the way range info is stored, since the base class uses it for fold-info:

Now add code to the scanner which tells the highlighter about opening and closing folds:

ABlockType
Can be used to specify an ID for the block.

The field is not normally used as a pointer (though this is permitted). Normally IDs are a numeric enumeration.
If you have different types of block (e.g. in Pascal: begin/end; repeat/until, ...), and you do not want a block being closed by the wrong keyword ("end" should not close "repeat"), then you can give them IDs:
StartCodeFoldBlock(PtrUInt(1)) // or other numbers

IncreaseLevel
If set to False, then a block will be inserted that can not be folded.
Blocks like that can be used for internal tracking.

NOTE: All folds must be nested, they can not overlap. That is, the last opened fold must be closed first.
This refers to the "EndLvl" as shown in "Folding"(1.3) above
Overlaps (like IFDEF and begin in the IDE) can not be done this way.

True means a fold ends; False means an internal block is ended. If mismatched then folds will either continue, or end early.
TopCodeFoldBlockType can be used to indicate the ID of the innermost open block. One can use different IDs for internal blocks, and use this to set the value.

Returns the ID of the innermost block.

DownIndex
can be used to get ID for the other block.

DownIndex=1 means the block that is surrounding the innermost.

Note: This example is done with the IDE "lazarus", your IDE might behave or be different in some aspects up to not using SynEdit for its Syntax-Highlighting at all

Sometimes you might want to edit existing highlighters (just like I wanted a few days ago) that already exist. In this example we're going to edit the highlighter for pascal-like code (classname: TSynPasSyn; package: SynEdit V1.0; unit: SynHighlighterPas.pas).

Say, what we want to reach is, that our application (lazarus in this case) differs between the three types of comments, which exist in Pascal:

This may be helpful, if you want to differ between different types of your comments (e.g. "Description", "Note", "Reference", etc.) and want them to be e.g. colored in different ways.

Note: Just in case you break something, I suggest to make some "NEW" and "/NEW"-comments, but you don't have to

E.g. under the declaration of "tkTokenKind", write this:

If you do use lazarus, just reinstall the SynEdit-Package, if not, recompile your project/the package/<similar>.

DONE ! No seriously, you are now ready to differ between the different types of comments.

The lazarus-IDE does automatically detect, what attributes exist and shows them in the options, such as saves them, if you change them. If your application/IDE doesn't do this, you will have to set Color/Font/etc. of the new Attributes somewhere manually (e.g. in the constructor of TSynPasSyn)

Threads on the forum: