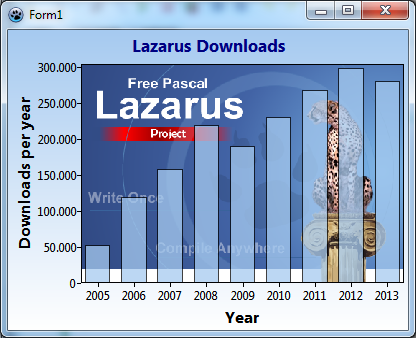 Standard charts created by the TAChart package have a gray background. Using the Color property it is possibly to modify the color of the entire chart background, and the BackColor controls the color of the chart area encloses by the axes, the so-called "back wall". In any case, the design of quite conventional compared to other charting packages and applications. Is is possible to give the chart background a more interesting design?

In this tutorial, we will demonstrate that this is a relatively easy task by taking advantage of one or two events of TChart. We will create a plot of the evolution of the Lazarus downloads during the previous years. To highlight the connection with Lazarus we plan to show the Lazarus splash screen as a background image of the chart.

These data will be basis of our chart.

Setting up the chart

Create a new project and add a TChart to the form. Client-align it such that the chart fills the entire form. Drag the form borders such that the window is about 400 pixels wide and 300 pixels high.

We will plot the "Years" along the x axis, and the "Download count" along the y axis of the chart. Therefore, go to bottom axis, find the property Title and enter "Years" in the field for Caption. Show the title by setting its property Visible to true. Adapt other properties to your liking: I often prefer to have the title in bold font and larger size (12). And sometimes the grid is annoying, you can turn if off by setting the Visible property of the axis' Grid to false. Repeat with the vertical axis, the title should be named "Downloads per year".

We should also show a title above the chart. Select the text "Lazarus downloads" for the Text of the chart's Title. Again, set the property Visible to true in order to show the title. You may also want to switch the title font to bold and increase its size a bit. 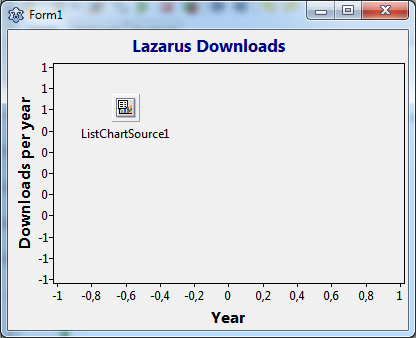 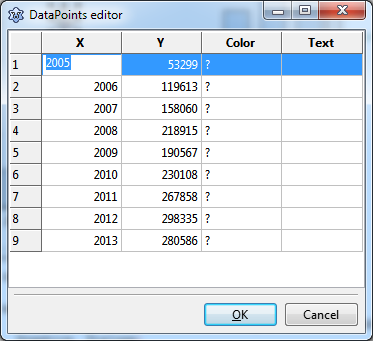 A good series type for time-series data is a bar series. At first we add a TBarSeries to the chart: Double-click on the chart to open the series editor, click "Add" and select "Bar series" from the dropdown list. We do not see the series because it has no data yet.

There are various ways to assign data to the series. Since we have static data which do not change during the program it is convenient to use a TListSource which provides a datapoint editor for entering data at design-time. You find the ListChartSource in the "Chart" component palette, it is the second icon. In order to enter data click on the ellipsis button next to the property DataPoints of the component - this opens the DataPoints editor. Enter the data from the table above into the editor grid: the "year" goes into the "X" column, the "downloads" go into the "Y" column. There is no need to enter anything into the "Color" and "Text" columns. 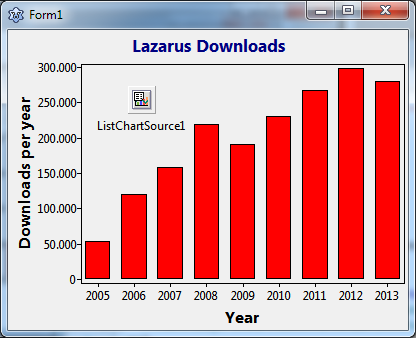 So far, the project has been standard. Now let's intercept the drawing process...

TChart offers several events where our own code can be hooked in:

The Lazarus logo makes a nice background for our chart of Lazarus download counts. We want to paint it in the chart area enclosed by the axis, the back wall. As you saw above in the listing of chart event there is an event which perfectly fits our need: OnBeforeDrawBackwall.

At first we have to make the logo available to the program. The logo file has the name "splash_logo.png" and can be found in the folder "images" of your Lazarus installation. For simplicity, copy it to the folder which will hold the exe file of our project (or use the full file path in the code below). Since the logo is a png file we need an instance of a TPortableNetworkGraphic, or - which is more flexible - a TPicture. Let's declare a variable FBackImage of the latter type to the form and add code in the form's OnCreate event to load the image file. Of course, don't forget to free the image when the program closes:

Loading the image directly from file requires that the image is distributed along with the exe file. This can be avoided if the image is added as a resource to the binary. For this purpose you have to create a resource file containing the image - see the wiki article .... on how to do that. The Lazarus images folder contains a ready-made resource file with the logo, "splash_logo.res". If you want to use this approach, copy this file to the project folder and use this alternative OnCreate code (don't forget to add {$R splash_logo.res} at the beginning of the implemenation section of the unit):

Whichever method you decide to use - now it's the time to add code to the OnBeforeDrawBackwall event of the chart. It is very simple: we just "stretch-draw" the image on the canvas into the rectangle provided as a parameter, and - of course - we set the ADeDefaultDrawing to false to by-pass the default painting method. It is important that you draw on the canvas provided as a parameter, not on the chart's canvas, because painting of the chart is executed by special backend classes which can provide different canvases, for example, if the chart is to be printed.

Because the event handler is run-time code you have to compile the program to see the current state of the chart: 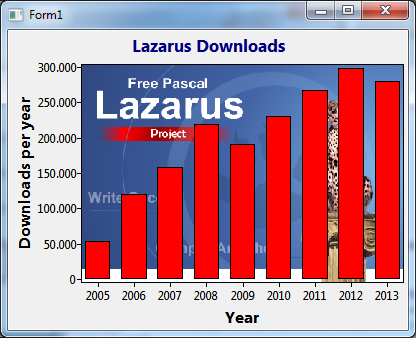 In the outer region of the chart we still see the famous gray background. How about replacing it by a decent gradient? From the predominant blue colors of the Lazarus logo we could select a vertical transition from bright blue (clSkyBlue) at the top to white a the bottom.

We know from the summary of painting events that the OnBeforeDrawBackground is the right event which we can use to draw the chart background on our own. But how to paint a gradient? Very easy: the canvas has a method GradientFill which accepts start and end colors and the gradient direction. 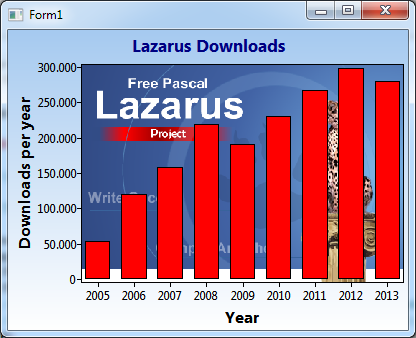 The red bars of the series look a bit "aggressive". How about a more decent sky-blue again? Select the bar series in the object inspector and set the SeriesColor to clSkyBlue.

And it would be better to see more of the Lazarus cheetah which is largely covered by the bars. The bar series has a property Transparency. The default value, 0, means opaque, the maximum allowable value, 255 means fully transparent. A low value, such as 64, adds some transparency to show more details of the cheetah, but does not push the bars too much in the background.

And this brings us to the chart which is displayed at the top of this page, and to the end of this tutorial.

These are the basic steps for user-painting of chart backgrounds:

The source code of this tutorial project can be found in the folder tutorials/background of trunk TAChart installations.