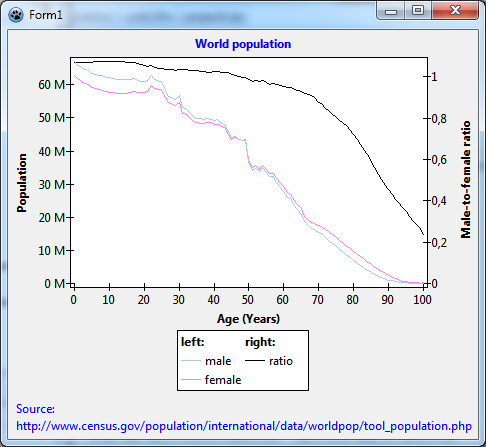 When different quantities are plotted into the same chart it happens quite often that they cover a largely different range. In an "ordinary" chart, the series with the large values dominates over the series with the small values which is compressed to a flat line. The chart would be much more meaningful if different axes could be used, one for the large values, and one for the small values.

When you worked through the tutorial on user-defined chartsource you will have come across such a case. In that tutorial we created a diagram of the world population as a function of age. There was also an option to draw the ratio of male-to-female population. This latter number is considerably smaller than the population count. So, if both data were combined in the same chart, the population ratio would shrink to a horizontal line.

This is the background for today's project. We will go to the population data again and draw population count and the male-to-female ratio into the same chart.

You will learn how to

This is our "disclaimer", as usual: You should be familiar with Lazarus and FPC, and you should have a basic understanding of the TAChart library (go through Getting started tutorial if you don't). In this particular tutorial, it would also be helpful if you had studied the tutorial on user-defined chartsource first.

Now, we have all that we need to start a new project. Add the unit population.pas to the form's uses list. Add a variable PopulationData of type TPopulationArray to the private section of the form. And read the data file by calling the procedure LoadPopulationData (in the population unit) from the form's OnCreate event handler:

Preparation of the chart

Now we can begin charting...

Add a TChart component to the form:

Where do the series get their data from? Our data are stored in the PopulationData array, so it would be best to take advantage of a user-defined chart source. To be exact: we need three chart sources, one for each series.

Here we tell the chart source where it finds the data: the x value is taken from the Age field of the TPopulationRecord, and, depending on the chart source, the y value is taken from the Male, Female or Ratio fields of the TPopulationRecord. We divide the population count by 1 million to get rid of the many zeros. So, don't forget: the population axis will be labelled in terms of millions; we will come back to that later. We also divide the male-to-female ratio, as read from the file, by 100 since we just want fractions, no percentages.

Time to compile? No, not yet. We have to tell the chart sources the number of data points. This information is known after reading the data file. Therefore, we set the property PointNumber of each chart source to the length of the data array in the form's OnCreate event handler:

At this stage, your form and object tree should look like this: 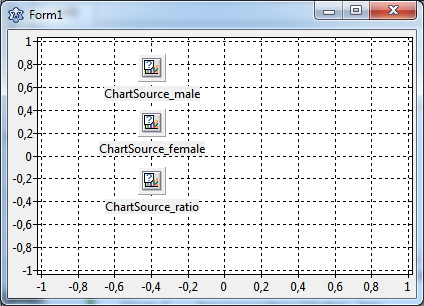 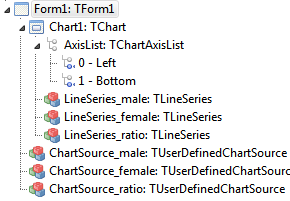 and when you compile you should see something like this: 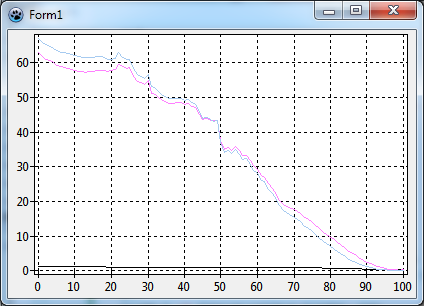 As mentioned in the introduction, the male-to-female ratio -- that is the black line -- is very flat and shows almost no structure. This is due to the different magnitudes: the population numbers go almost up to 70 while the ratio is around 1.

Setting up a second y axis

We need a second y axis.

For this, go to the object tree, right-click on AxisList (right underneath the Chart1) and add a new axis to the chart. Now we have three axes:

Select the axis #2 which is still a left axis at this time, and in the object inspector, set its Alignment to calRight.

This is maybe a good place to mention that having two y axes is not the limit. In fact, you can add any number of axes to the AxisList of the chart, and you can use them as vertical axes at the left or right, or as horizontal axes at the top or the bottom of the chart. Have a look at the parameter Group of the axis: axes with the same group parameter are drawn into the same rectangle, axes with different group values are drawn side-by-side.

How does the chart know which series belongs to which axis? For this purpose, each series has properties AxisIndexX and AxisIndexY. Since the male and female series will be plotted on the left axis set their AxisIndexY to 0 -- a look at the object tree tells you that this is the index of the left axis. The ratio series belongs to the right axis, its AxisIndexY must be set to 2. We could also set the axis indices for the bottom axis, but this is not absolutely necessary here.

When we compile the result is a bit disappointing: no change - the black ratio series is still very small. 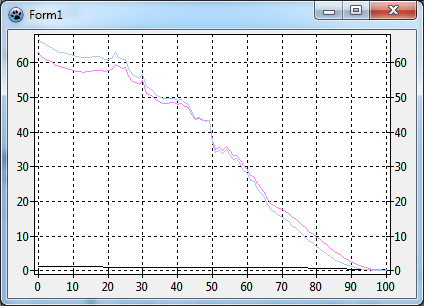 The reason why the second y axis is not scaled independently of the first one is that we ignore so far the internal coordinate systems of the chart. TAChart employs three coordinate systems in the transition from "real world" data to the pixels on the screen:

So, there are two mapping operations involved when calculating the coordinates of a data point on the screen:

If the axis transformation from axis to graph coordinates is not specified a simple 1:1 mapping is used instead.

Oh - we did not use any axis transform. Therefore, our population and ratio data still "live" in a common world of coordinates. To separate both data sets we need to apply a transformation to each data set which maps it to the same interval of graph coordinates, say, from 0 to 1.

Of course, TAChart has a tool for this purpose, the TAutoScaleAxisTransform. It is not directly accessible from the component palette, but is a child of the TChartAxisTransformations component.

This is the object tree after these operations: 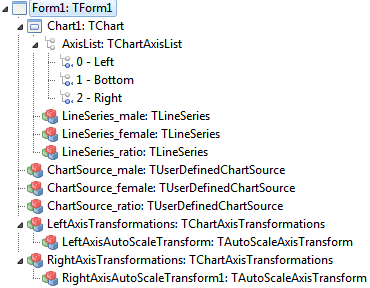 Look at the properties MaxValue and MinValue of the AutoScaleAxisTransforms. For both transformations we have MaxValue = 1 and MinValue = 0. This means that each axis is mapped to the range between 0 and 1, in other words, both data sets are compressed or expanded to fill the chart area completely.

When we compile we see that this exactly happens. 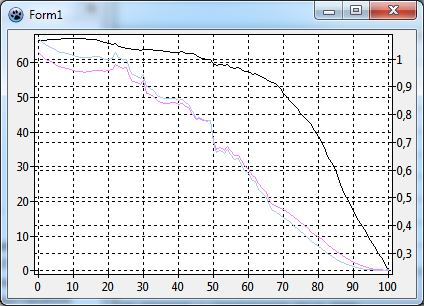 We could also, for example, set the RightAxisAutoscaleTransform's MinValue=1 and MaxValue=2. Then the population data would still be mapped on the axis from 0 to 1, and the male-to-female ratio data would be mapped to the range from 1 to 2, i.e. we would have a paned chart where the lower half would be occupied by the population series and the upper half by the ratio series. But maybe that's stuff for another tutorial. We leave the MinValue and MaxValue properties at their defaults.

The most difficult part is done now. What is left is to clean up the chart.

Now we should take care of the fact that we had divided that input data by 1E6, our plot somehow should show this. We could change the title of the left axis to "Population (in millions)". But let's go a different way now: we could append an "M" to the labels, as a shortcut to the correct order of magnitude ("M" = "Mega" = "million"). This can be easily done since TChartAxis has an event OnMarkToText which allows to modify the text displayed at the axis' tick marks. Assign the following procedure to this event of the left axis: 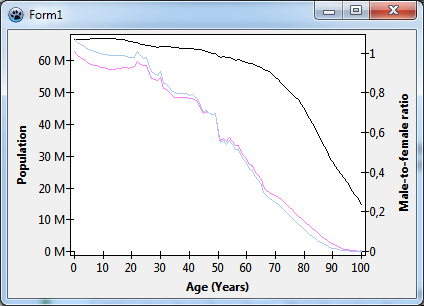 Setting up the legend

We are almost finished now. What is left is a legend -- so far, is is not possible to distinguish which curve belongs to which data. So, go to Chart1.Legend and set Visible to true. You see only short pieces of the curves in the legend, no texts. This is because we did not assign a Title to each series. Do this now, use the titles "male", "female", and "ratio" for the corresponding series.

Since we have two axes, it would be fine to have a header "left" above the entries for the male and female series in the legend, and a header "right" above the entry for the ratio series. This effect can be achieved by grouping. Each series has a property Legend which can be used to control the appearance of the series in the legend. The property GroupIndex allows to group a set of series together underneath a common header. So, set the Legend.GroupIndex of the male and female series to the same number, and set that of the ratio series to a different number. Now we go the Chart.Legend and define the titles of the group headers by entering text in the property Chart.Legend.GroupTitles, line by line for each GroupIndex. And maybe you can also go to Chart.Legend.GroupFont and set the font to bold.

At first, we set the legend's Alignment to laBottomCenter. Then we change the ColumnCount to 2. We are lucky -- the five legend entries fit into the two-column legend just as we want it. Otherwise we might have to play with the legend Order or the filling sequence of the multicolumn legend (property ItemFillOrder), or might have to introduce dummy items (TAChart_documentation#User-defined_legend_items).

TAChart's legend is very flexible - please have a look at the documentation of the legend to learn more about it.

At the end, we add the text "World population" as the chart's title, and we should mention our reference for the data in the footer - we don't want to steel data...