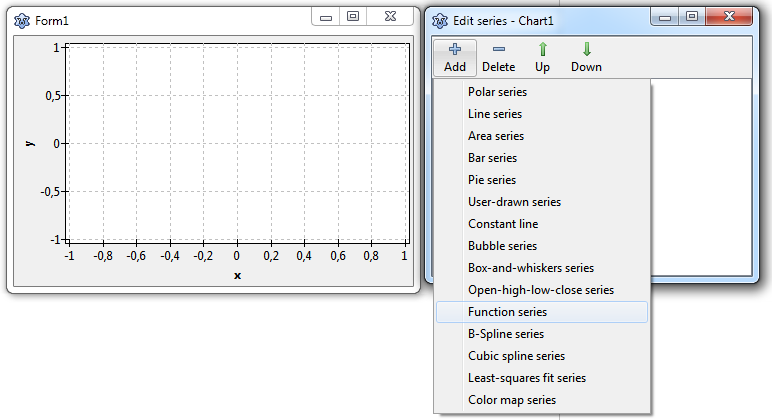 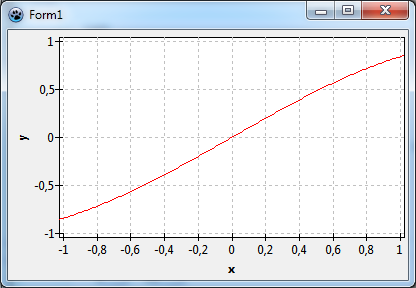 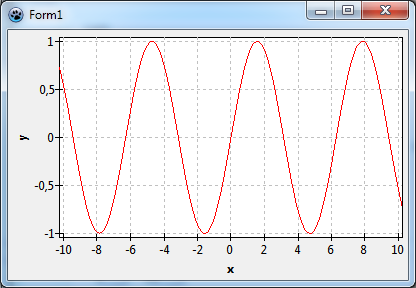 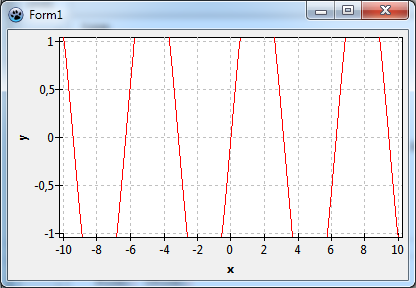 If you don't have the trunk version of Lazarus you have to set the extent manually: Select the series Extent again, set YMin to -2, YMax to 2, and UseYMin and UseYMax to true. This will show us the full sine curve with amplitude 2. 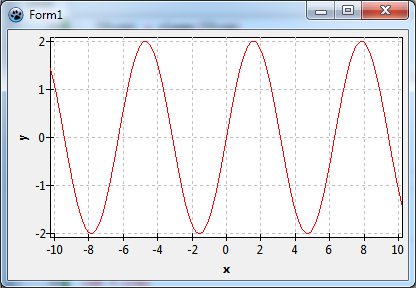 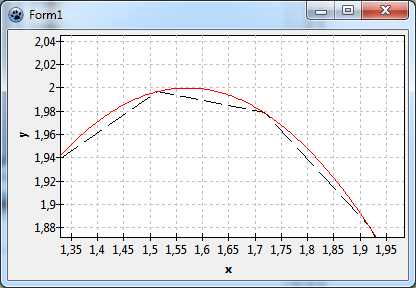 What is the reason why the function series is so smooth even at extreme magnification? This is because the function is calculated at very small intervals defined by the property Step of TFuncSeries. This number is in screen pixels and, therefore, the smoothness is independent of zoom magnification. Its default value of 2 is a good compromise between almost perfect resolution and drawing speed for most functions.

In this exercise we want to plot a different function, y = tan(x). We can easily adapt our project to this function by changing the OnCalculate event handler (you will need the math unit in the uses clause): 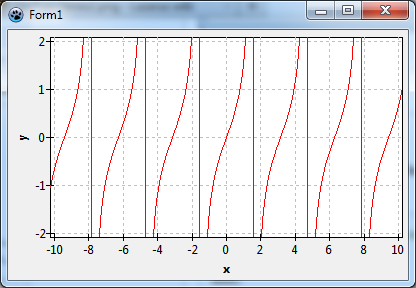 The chart looks fine at first sight, but when you remember some basics of the tan function from school you'll notice that the (almost) vertical lines near ±1.6, ±4.7, ±7.9 are not correct. The function is not defined at these locations (to be exact, at (n+1/2)π). The lines should not be there. Because the function series does not "know" about these discontinuities, it draws a connection line between the last and first calculated point before and after the discontinuities. 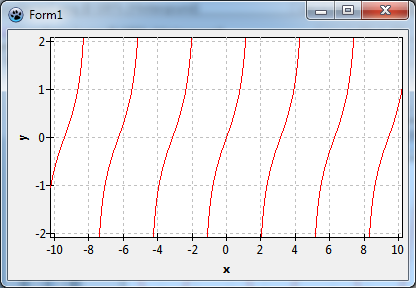 It should be mentioned, however, that the code in the FormCreate procedure is too specific and is correct only for our x axis range from -10 to 10. Suppose the user could zoom out or could change the axis limits in some other way. Then these domain exclusions may not be appropriate any longer. Therefore, you should provide a more general method, maybe "UpdateDomainExclusions", and call it where appropriate. The first idea would be to use the chart's OnExtentChanged event. Without going into details, however, this may cause a hang under some circumstances because this event occurs after drawing of the chart. In Lazarus v2.1 or newer, however, there is a new event OnExtentValidate which is better suited because it is called before any drawing. If you stick to an older version you could use the event handler for TChart.OnAfterDrawBackwall although its name is not intuitive for this purpose. Don't forget to call DomainExclusions.Clear to avoid adding the same points again and again.

But when we run the program it crashes because of a floating point exception! Where does that come from? Our x axis starts at -10, and the logarithmic function can be calculated only for positive x values. What can be done against that? The answer is domain exclusions, again. We just forbid calculation of the function for negative values and for x = 0. This can be achieved by adding a range from -INF to 0 to the series' domain exclusions. The method AddRange, by default, also includes the end points of the interval, so we need no special treatment for x = 0. We modify the form's OnCreate event handler as follows:

What if we would want to plot the function y = sqrt(x)? There is a subtle difference to y = log(x): while both functions cannot be calculated for x < 0, sqrt(x) is defined also at x = 0, i.e. the point x = 0 must be excluded from the domain exclusion interval. This can be achieved in the AddRange method by specifying the open end(s) of the interval in an optional third parameter set of TIntervalOption = (ioOpenStart, ioOpenEnd). The correct code to set up the DomainExclusions for y = sqrt(x), therefore, is

One thing to mention is the property Epsilon of the DomainExclusions. This value controls the distance between the endpoint of the excluded interval and the last drawn function point (of a closed excluded interval). Its default value of 1e-6 is fine for most cases, but you may want to change it if it does not lead to correct results. 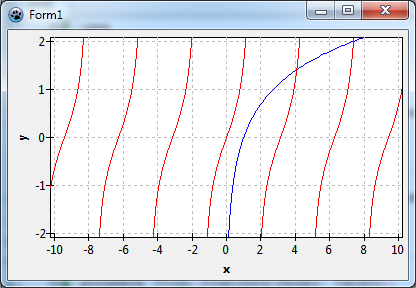 Before we finish we could apply some improvements. Never show several curves in the same chart without a legend, there would be no way to distinguish them. Enter the function names as the Title of both series, and set the legend's Visible to true.

Plots of mathematical functions often have axes crossing at the origin. The trunc version of TAChart now has an option to shift the axes away from the chart edge by applying the new property Position. But maybe you prefer the release version 1.0? For this case let's go another way:

Open the series editor again, and add two "constant line" series. These are very simple series that display a line parallel to the coordinate axes. Their location is defined by the property Position, their direction -- horizontal or vertical -- by LineStyle. There is nothing to do with Position which has the default value 0. You just have to set LineStyle of the one series to lsHorizontal, and that of the other one to lsVertical. The TConstantLineSeries also has an arrow which can be activated by setting Arrow.Visible to true. Play with Length, Width and BaseLength properties of an Arrow to find the shape that you want.

The source code for the final version of this tutorial project can be found in the folder tutorials/func_series of the TAChart installation.