If you want to add a plot or a chart to your Lazarus form you should have a look at TAChart. This is the standard Lazarus package for drawing plots and charts.

In this tutorial we will draw some elemental mathematical functions by TAChart. We will create a chart with three line series for the functions

Maybe it is necessary to expain the words "series" and "chart" here: the entire diagram is the "chart", and each of the functions will be displayed as a curve called "series". We will connect the data points by line sections, therefore, we will use the "line series". TAChart, of course, allows to use many other types of series, for example bar series, area series, pie series, or even advanced types like spline or fit series.

This guide will be very elemental. Of course, you'll need basic knowledge of the Object Pascal language and the Lazarus IDE.

TAChart is included in Lazarus, so there is no need for seeking this package somewhere in the internet. However, don't use a too-old version of Lazarus since TAChart is being actively developed and some features may change from version to version.

It is best if you follow this tutorial step by step. But if you want you can use the source code of the finished project at the end of this article.

To begin with, we create a new project in Lazarus and, in the component palette we select the page "Chart". Click on the left-most icon, the TChart component, and add it to the form. You will see an empty diagram with standardized x and y axes. 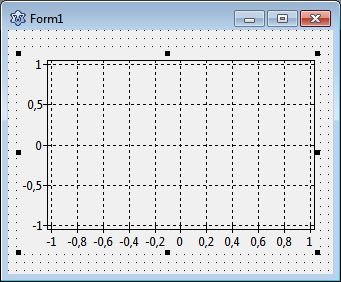 Now let's add series. For this purpose, double-click on the chart (or right-click, and select "Edit series" from the context menu). The TAChart series editor appears. It is still empty, but when you select "Add" you will see a menu with all the series types available within the TAChart package. Select the "line series". Repeat two times to create, in total, three line series that are assigned to the chart. They are not yet displayed in the chart, because they do not yet have any data. No data - no display. We will fix that in a minute. 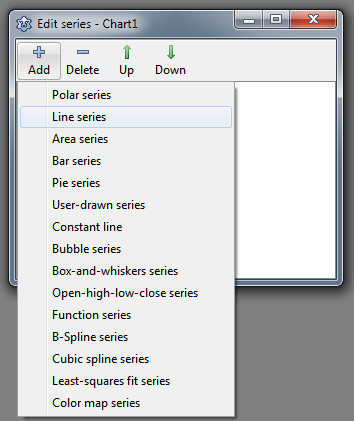 Before we do that let us have a look at the object inspector tree. TAChart uses a quite complex architecture of classes and containers, so it is important to understand the object tree. In the current state of our project we see the TChart component and its children, the three line series and the AxisList with Left and Bottom axes as children again. The series names are constructed according to Chart<number><SeriesType><Number>.

Why don't we give them more descriptive names, like SinSeries, CosSeries, and SinCosSeries? For this purpose, click on each series, and change the series Name in the corresponding field of the object inspector below.

Now it's time to add data. The easiest option is to create the data along with the form, i.e. we write a handler for the forms's OnCreate event. Of course, in a "real" project, you will add data at other occasions, for example after a button click which might initiate a calculation or read data from a file.

This procedure creates 100 data points for each series. The x values are calculated to be equidistant between MIN and MAX, i.e. -10 and 10. The important lines are the calls to the AddXY method of each series. This method takes the x and y coordinates of each data point and adds them to an internal list. There are also overloaded versions of this method where you can also pass a text label for each data point, as well as an individual color, but we don't need this feature here.

The mentioned list is a so-called chart source - this is a class which provides the data for plotting. You can use the built-in chart source, or you can link the series to a separate one. There is a variety of chart sources in the component palette, like

But enough on chart sources - the built-in source is sufficient for this introductory project. 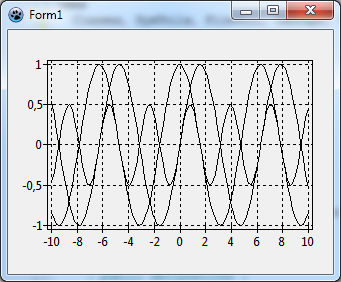 Ok, let's compile the program. We see the three curves, and the x axis automatically covers our data range between -10 and 10. Well - not too bad, but far from being perfect: The diagram is very confusing, we cannot distinguish between the individual lines, and we cannot tell which series belongs to which function.

When you recompile you will see the series colored. But we still cannot distinguish between the different functions. What we need is a legend.

Highlight the chart and, in the object inspector, scroll down to Legend and open the sub-properties. At the end, there is Visible which is false by default - so, set it to true, and recompile. 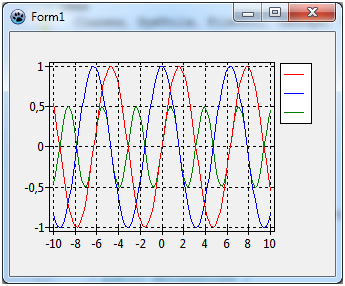 Well, it's getting better. What is missing, is an explanatory text for each series, like y = sin(x). For this purpose each series has a property Title - this is the text which will appear in the legend for each entry along with the symbol for the corresponding series. Therefore you have to go through all series again and use the object inspector to set Title to y=sin(x), y=cos(x), and y=sin(x)*cos(x), respectively. 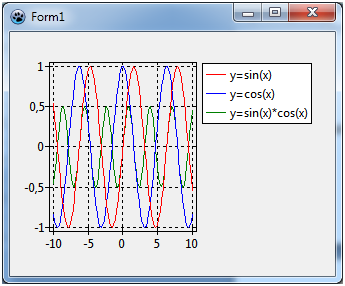 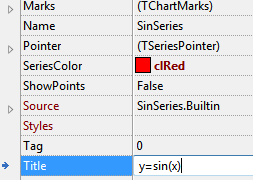 Now when you recompile, the chart is almost perfect. Almost - because the legend is quite large, and the diagram is squeezed into the remaining space. Of course, we could increase the size of the form. But can we also put the legend underneath the diagram? No problem: go back to the chart's property Legend and set Alignment to laBottomCenter. You should also set ColumnCount to 3, otherwise the legend items will be in a column instead of in a row. 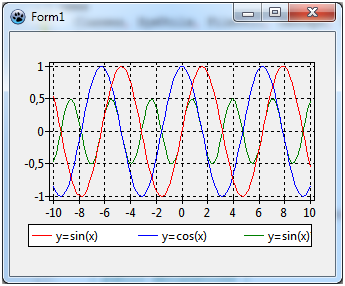 Ah! -- the third legend entry is truncated because the window is not wide enough. Align the chart to alClient and increase the width of the window a bit.

A few more things can still be improved: The axes should have a title, like "x axis" and "y axis", respectively, and there should also be a title above the chart.

To set the title for the x axis select in the object tree the item Bottom of the AxisList child component of TChart, or go to Bottom axis in the object inspector. Open the sub-properties where you'll find Title which has sub-properties again. The text in the field Caption will be displayed as a title above the chart. Don't forget to set Visible to true. You may also want to set the font style of the title to bold - you find that property under LabelFont. Repeat the same with Left axis.

Essentially the same procedure can be used to set the chart title: Scroll to the chart's property Title, enter the title in the field Text (you may even use a multi-line text here), and set Visible to true again.

And finally, you might prefer to use a white background of the chart area, this is changed by the property BackColor of TChart. And maybe the grid should be less emphasized, i.e. it might look better with color clSilver. Use the left and bottom axes property Grid.Color to change that.

In the end, our chart looks like this. Neat, isn't it? And it was not difficult at all... 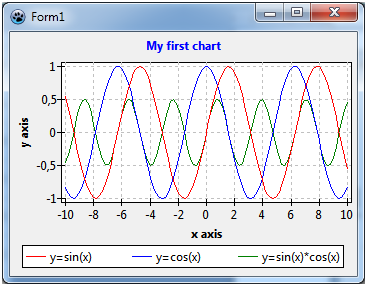