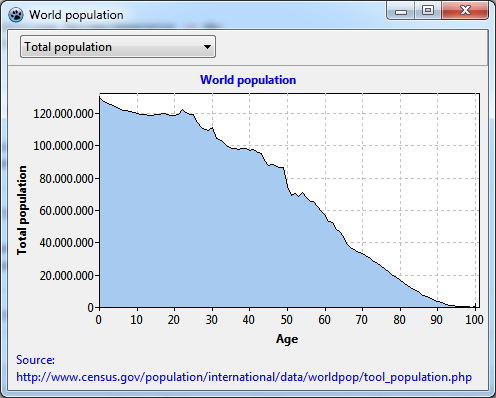 In this tutorial we use TAChart to plot the age distribution of world population. In doing this, you will learn

As usual, we assume that you are familiar with Lazarus and the Object Pascal language and have some basic knowledge of the TAChart package that you would acquire by working through the Getting Started tutorial.

The site www.census.gov contains a wealth of demographic data. This link leads you directly to the data that we want to plot: world population as a function of age and gender.

Go to that page, select a year and click "submit". In the lower part of the window, you will see a table with the columns "Age", "Both Sexes Population", "Male population", "Female population", and "Sex ratio". Use the mouse to select the data in the table (including header) and copy them to the clipboard. Paste the data into a text editor and save as "population.txt".

Open Lazarus and create a new project. At first we have to load the data to make them available for plotting.

We define a TPopulationRecord and an array of type TPopulationArray to hold the data of the population table:

Now let's read the file. Have a look at the unit population.pas in the Source Code section of this tutorial. You will find there a

which does the file reading and stores the data in a TPopulationArray.

Just include the unit population in your uses list to get access to this procedure. Add a variable PopulationData of type TPopulationArray to the private section of the main form. Now we have everything ready to call LoadPopulationData from the form's OnCreate event handler. This will read our data file into the array PopulationData.

Compile to check for obvious errors. You may get a runtime error on that the data file cannot be found. This is because our data file is assumed to reside in the same directory as the exe file. To fix this, either change the constant POPULATION_FILE to the correct storage location, or copy "population.txt" to the exe folder. Now the program should run fine, you will see an unspectacularly empty form, though.

The file contains various categories: total, male, and femal population, as well as male-to-female ratio. Why not display these data in our chart?

To prepare for this,

Now we are finished with preparations, and it's time for charting... 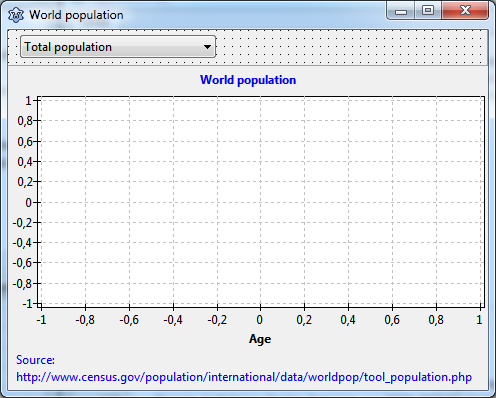 This time, we want to display our data as an area series. This type of series connects the data points as in a line series, but also fills the area underneath by a given color. It is very common to display demographic data, like a population pyramid, in this way.

So, add a TAreaSeries to the chart. As usual, you don't see it at this time because it does not yet have any data. But we can prepare some properties:

Later, when the series has data, you should play around with these and other properties to see what they do.

Now, how do we get our data to the area series?

The first idea might be iterate through our PopulationData array and copy the data to the series by means of AddXY calls, like this:

The disadvantage of this approach is that we would have the data in memory twice: in the PopulationData array and in the series - not so good: we would be wasting memory, and we would have to synchronize both storages when data points are added, deleted or edited.

To avoid this, we add a TUserDefinedChartSource to the form, it is the third or fourth icon from the left in the Chart component palette. This chart source is made to interface to any kind of data storage, the source itself does not store any data. You just have to write an event handler for OnGetChartDataItem in order to transfer the data. For this purpose, the event takes a var parameter AItem of type TChartDataItem that is defined as follows (with elements omitted that are not needed here):

The fields X and Y are the coordinates of the data point.

Now we write the event handler for OnGetChartDataItem:

AIndex is the index of the datapoint which is queried. Since both chart source and our PopulationData array begin at index 0 we just look into our data array at this index and copy the data to the corresponding elements of the AItem. Note that we pick the y coordinate according to what is selected in the combobox. In this way, the UserDefinedChartSource can provide a multitude of data.

There are still some important things to do: 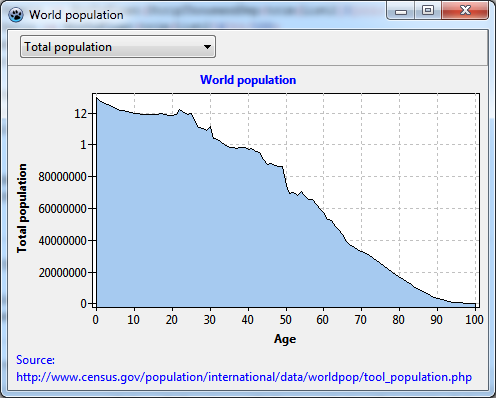 Compile the project in this stage. Not too bad, some flaws, though.

When you compile and select another combobox item you will find that the series does nicely update to the selected category. But the axis is frozen, it should rescale automatically. Is this a bug?

And we can fix another issue: the caption of the y axis should change whenever a different category is selected. For this, we copy the text of the selected combobox item to the chart's LeftAxis.Title.Caption. We add a corresponding line the the combobox OnSelect event handler:

Now switching of data categories by the combobox is working fine.

A minor flaw left: Since our y data do not contain a 0 the y axis does not begin at 0 due to the automatic axis scaling. But it would be nice if there were a zero. For this, we must partially turn off automatic axis scaling. The Chart.Extent defines a rectangle for the minimum and maximum x and y values. When we set Chart.Extent.UseYMin to true, the y axis minimum is taken from the value of Chart.Extent.YMin, and this is 0 by default. Therefore, we have our zero back. 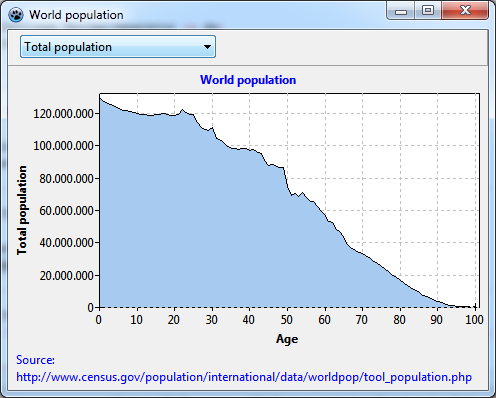 But there is another small problem now: the lowest grid line is drawn on top of the x axis. First of all, the black lines that we see as axes are not the axes themselves, but belong to the frame drawn around the plotting area by default. You can test this by setting Chart1.Frame.Visible temporarily to false. For the axes, there is a property AxisPen where the "true" axis line can be turned on by AxisPen.Visible = true. After after doing this, the x axis is still a dashed line. This is caused by the drawing sequence. By default, the y axis, along with its grid, is drawn after the x axis. If you want to have the x axis drawn first you go to the object tree and drag the x axis above the y axis.

When you compile the chart is perfect. 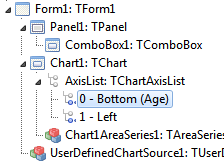 For Lazarus v2.1+ you can find the source code of this tutorial project in folder components/tachart/tutorials/population1 of your Lazarus installation. For older versions, copy and paste the following code to the corresponding files.