Traditionally, compilers optimize a program procedure by procedure, or at best compilation unit per compilation unit. Whole program optimization, abbreviated WPO, means that the compiler considers all compilation units that make up a program or library and optimizes them using the comprehensive knowledge of how they are used together in this particular case.

The way WPO generally works is as follows:

In some implementations, the compiler generates some kind of intermediary code (e.g., byte code) and the linker performs all WPO along with the translation to the target ISA. In case of FPC however, the scheme followed is the one described above.

A few general principles have been followed when designing the FPC implementation of WPO:

First of all, compile your program (or library) and all of its units as you would normally do, except that when compiling the main program/library you add

The compiler will then, right after your program has been linked, collect all necessary information to perform the requested WPOs during a successive compilation run, and store this information in /path/to/feedbackfile.wpo.

To actually apply the WPOs, recompile the program/library and all or some of the units that it uses, using

, thereby pointing the compiler to the feedback file generated in the previous step.

The compiler will then read the information collected about the program during the previous compiler run, and use it during the current compilation of units and/or program/library.

Units not recompiled during the second pass will obviously not be optimized, but they will still work correctly when used together with the optimized units and program/library.

The example below refers to twpo4.pp.

Compile the program a first time, collecting feedback in twpo4-1.wpo in the current directory. v The compiler will record which classes are created in the program (tchild1 and tchild2), and after the linking step also that the notcalled procedure is in fact not called.

Afterwards, save the generated assembler code in twpo4.s1 for later comparison.

Now compile the program a second time, using the information in twpo4-1.wpo and collecting new information in twpo4-2.wpo. At this point, the compiler knows that no instance of the tbase class is created in the program, and therefore it replaces all regular entries in its virtual method table with references to FPC_ABSTRACTERROR. Virtual class methods cannot be eliminated this way, since they can also be called without constructing an instance of this type.

Because the compiler knows from the previously generated feedback file that the notcalled procedure is never called, it will also record that only an instance of tchild1 is created, as the tchild2 instance was only created inside this notcalled procedure. For optimization purposes, it will however still consider that an instance of tchild2 may be created, as for optimization purposes it still uses the feedback file generated during the previous compilation.

Afterwards, we again save the generated assembler code for later comparisons.

Compile the program a final time, using the information collected in twpo4-2.wpo. This time, the compiler knows that only a tchild1 instance is created, and will therefore turn the bb.test call from a virtual method call into a static method call (because it knows that even though the type of bb is tbase, in practice it can only be a tchild1 since no tbaseh or other tbase-descendent class instance is created).

Now, let's have a look at the differences between the generated assembler files. After the first recompilation:

As you can see, all references to the virtual methods in the virtual method table of tbase have been removed, since the compiler knows they can never be referenced. This allows the linker to throw away these methods if they are not referenced anywhere else either. In our example, that is only true for tbase.test.

Now let's look at the effect of the second recompilation:

As you can see, the two virtual method calls to bb.test (one inside the never called notcalled procedure, and one in the main program) have been replaced with calls to tchild1.test.

Note that you could also recompile the entire run time library for this particular program, if you want. 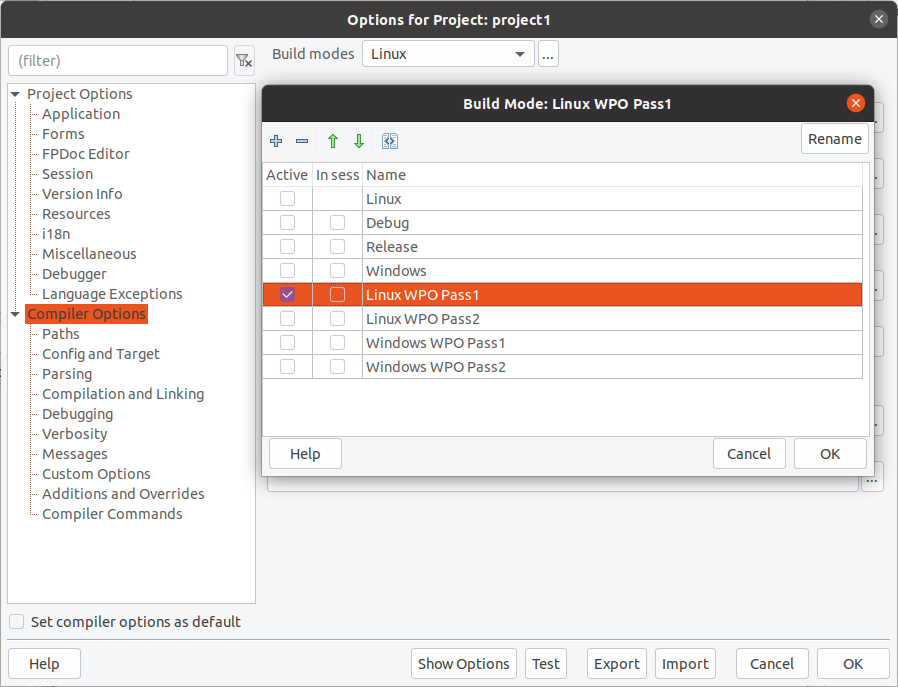 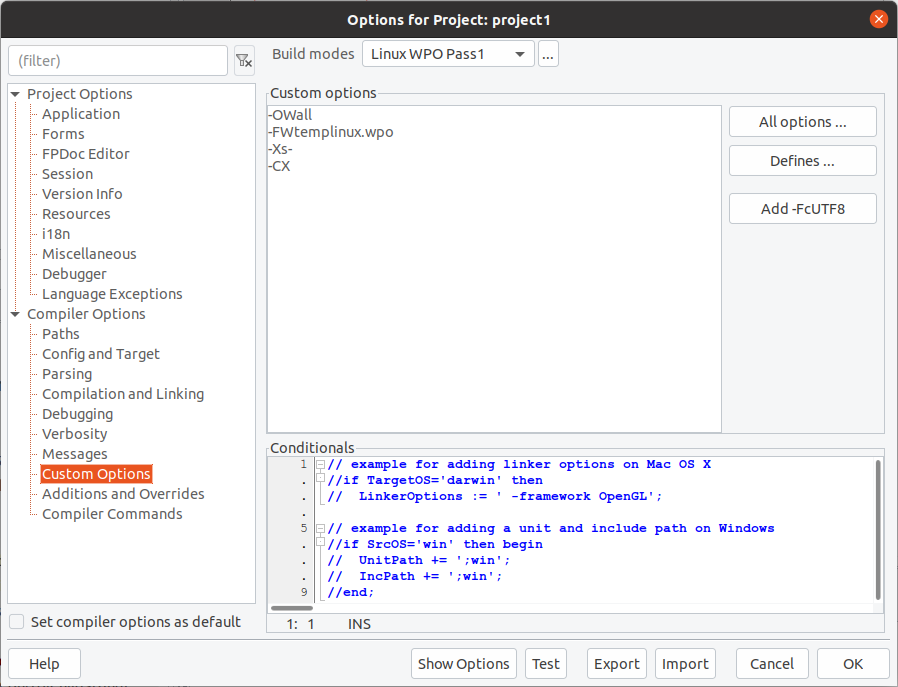 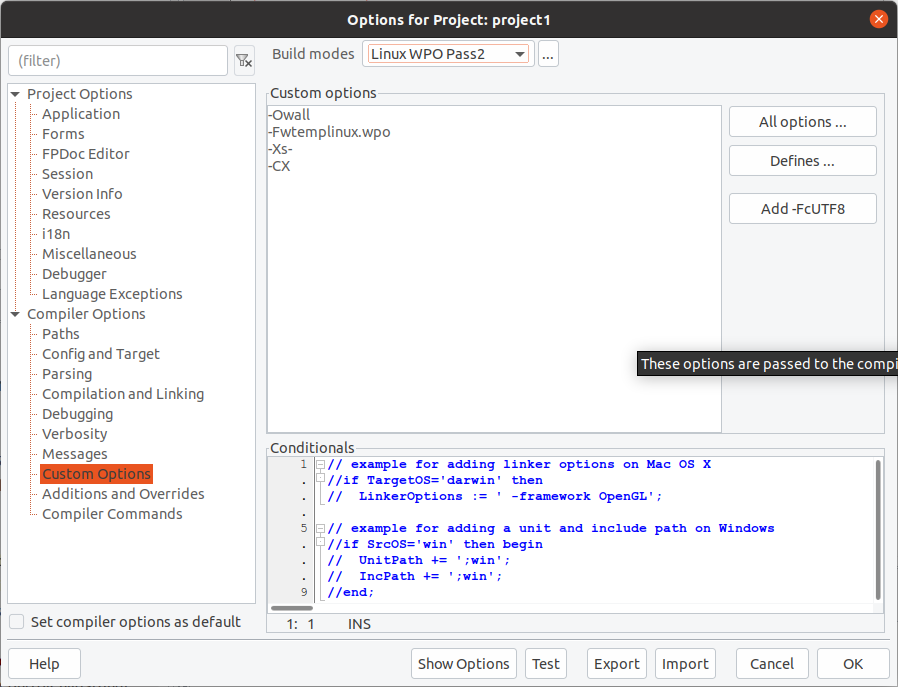 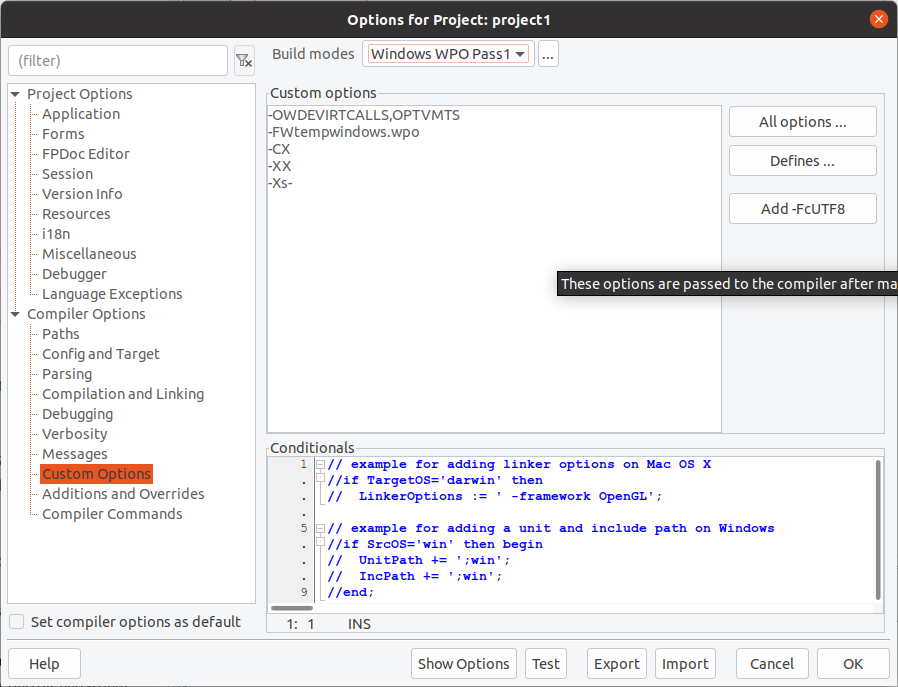 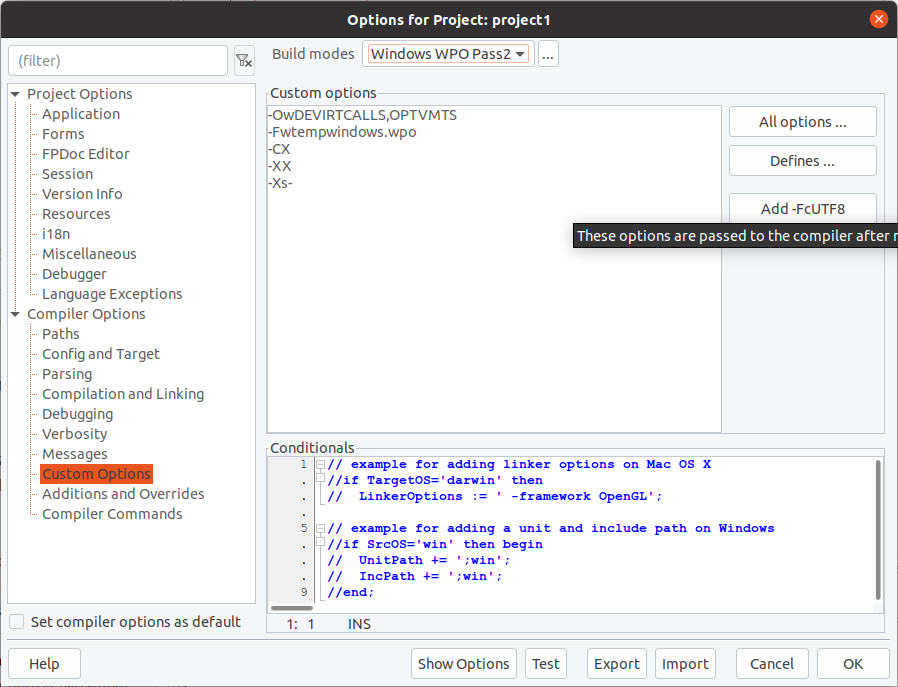 When you are happy with your Project Options settings, you might want to click the Export button, to save them to an XML file, which you can import into other projects later.

When you are ready to compile your program, from the IDE menu, select Run | Compile Many Modes. Select both Pass1 and Pass2 to compile in exactly that proper order. 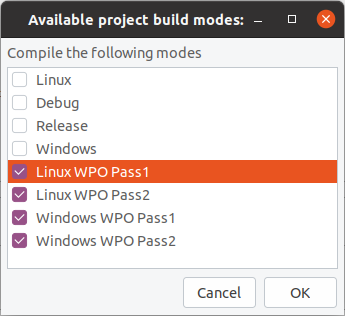 If your Build Modes are out of sequence, you could simply compile each Pass separately, in proper order. Alternatively, you could very carefully manually edit in a text editor your LPR project file (after first making a backup copy), to put the Passes into correct order.

Since whole program optimization requires multiple compilations, it is advisable to only use this functionality when compiling a final release version.

Also keep in mind that once a unit has been compiled using wpo for a particular program, it has to be recompiled if you want to use it in another program.

parameter
effect
Changes virtual method calls into normal (static) method calls when the compiler can determine that a virtual method call will always go to the same static method. This makes such code both smaller and faster. In general, it's mainly an enabling optimization for other optimizations, because it makes the program easier to analyse due to the fact that it reduces indirect control flow.
limitations

parameter
effect
This optimization looks at which class types can be instantiated and which virtual methods can be called in a program, and based on this information it replaces virtual method table (VMT) entries that can never be called with references to FPC_ABSTRACTERROR. This means that such methods, unless they are called directly via an inherited call from a child class/object, can be removed by the linker. It has little or no effect on speed, but can help reducing code size.
limitations

parameter
effect
This parameter does not perform any optimization by itself. It simply tells the compiler to record which functions/procedures were kept by the linker in the final program. During a subsequent wpo pass, the compiler can then ignore the removed functions/procedures as far as wpo is concerned (e.g., if a particular class type is only constructed in one unused procedure, then ignoring this procedure can improve the effectiveness of the previous two optimizations).
limitations

Format of the WPO feedback file

This information is mainly interesting if you want to add external data to the WPO feedback file, e.g. from a profiling tool. If you are just a user of the WPO functionality, you can ignore what follows.

The file consists of comments and a number of sections. Comments are lines that start with a #. Each section starts with % (percent sign and space) followed by the name of the section (e.g.,% contextinsensitive_devirtualization). After that, until either the end of the file or until the next line starting with with "% ", first a human readable description follows of the format of this section (in comments), and then the contents of the section itself.