Overview of Free Pascal and Lazarus


Free Pascal (FPC) is an open-source Pascal compiler with two notable features: a high degree of Delphi compatibility and availability on a variety of platforms, including Windows, Mac OS X, and Linux. Free Pascal's compatibility with Delphi includes not only support for the same Object Pascal programming language that Delphi uses, but also for many of the same libraries of powerful routines and classes that Delphi is justly known for. This includes familiar units such as System, SysUtils, StrUtils, DateUtils, Classes, Variants, Math, IniFiles and Registry, which are included with Free Pascal on all supported platforms. Free Pascal also includes units such as Windows, ShellAPI, BaseUnix, Unix and DynLibs for accessing features specific to an operating system. These dozen or so units make up the core of what is usually referred to as the Free Pascal run-time library (RTL).

Lazarus is an open-source development system that builds on the Free Pascal compiler by adding an integrated development environment (IDE) that includes a syntax-highlighting code editor and visual form designer, as well as a component library that's highly compatible with Delphi's Visual Component Library (VCL). The Lazarus Component Library (LCL) includes equivalents for many of the familiar VCL controls such as forms, buttons, text boxes and so on that are used to create applications that have a graphical user interface (GUI).

Like Delphi, Free Pascal and Lazarus are both general-purpose programming tools, meaning you can develop a wide variety of programs with them, including the following:

You can create a console app with no more than a text editor and the Free Pascal compiler. You don't have to use Lazarus to develop console apps. However, if you prefer to work in an integrated environment, you can use Lazarus to create a project for the console app and then edit and compile the code in the Lazarus IDE.

A dynamically loadable library is usually a collection of compiled functions that can be called by other programs. As the name suggests, the library is not linked into your executable at compile-time, but instead is loaded at runtime. In Windows, a library file has a .dll extension (dynamic-link library, or DLL). In OS X, a library file has a .dylib extension (dynamic shared library). In Linux, a library file has an .so extension (shared object library). Dynamically loadable libraries are typically used to develop add-ons for other programs, to develop libraries that can be called by programs written in other languages such as C and C++, or to partition large projects into chunks so that the project's developers don't step on each other's toes. Windows itself is made up of hundreds of DLLs, as are many other large applications such as OpenOffice.org.

Like console apps, you only need a text editor and the Free Pascal compiler to develop a library, although you can also create a Lazarus project for the library and develop the library in the Lazarus IDE.

On Windows, DLLs have an undeserved reputation for being overly complex and unstable. This has more to do with the way they've sometimes been installed than it does with DLLs themselves. Actually, since passing information to and from DLLs is normally done with standard, simple data types (rather than with language-specific objects or structures), this requirement forces programmers to pay more attention to what they're doing. If done right, this can result in better, more stable programs.

Most of the programs we use daily are GUI apps, including word processors, Web browsers, spreadsheet programs, even many development tools. Lazarus and Delphi are both good examples of full-featured GUI apps. When developing a GUI app with Lazarus, not only do you develop units of Pascal code, you also design forms containing visual controls such as buttons and list boxes. Like Delphi, form design in Lazarus is done visually. Control properties can be set in the IDE or in code. 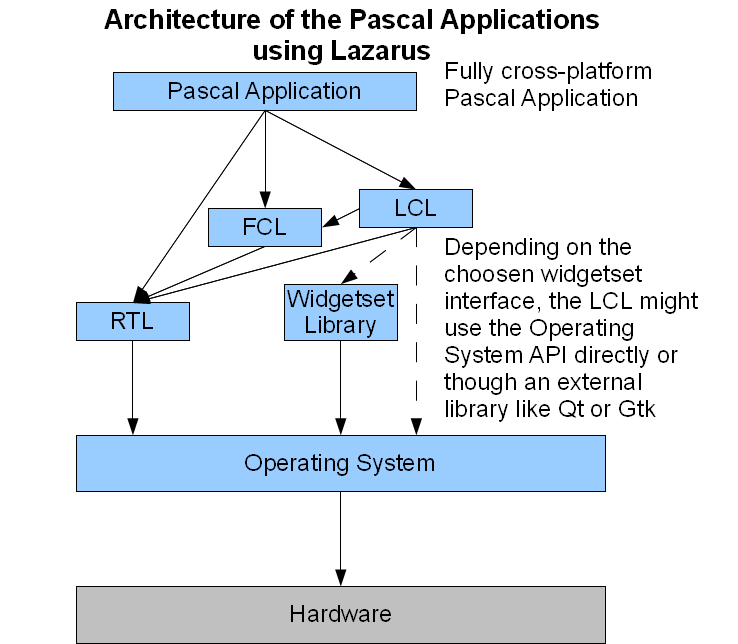 And the LCL itself follows the following architecture: 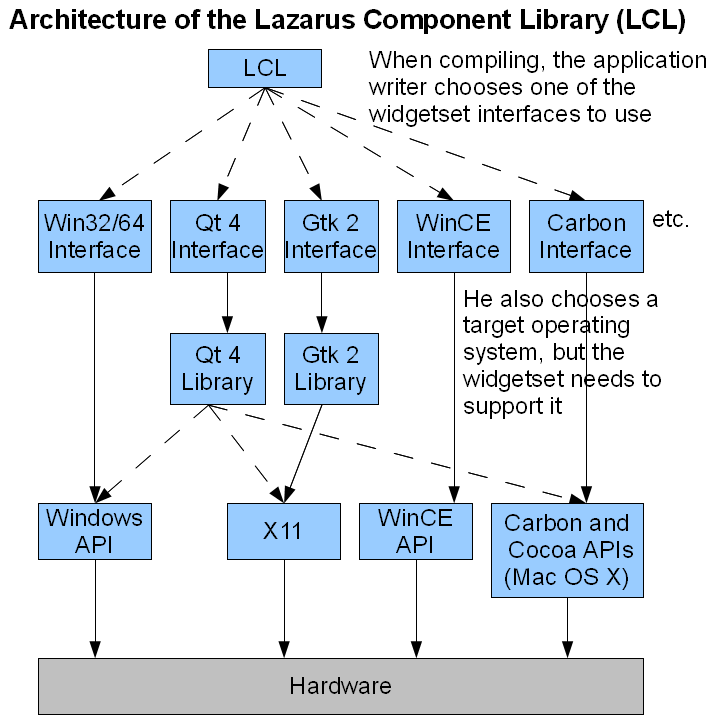 The LCL has platform independent units, like controls, forms, buttons and grids. They can not work on their own. They are abstract and need a backend. The LCL provides many different LCL interfaces that communicate with backends or "widgetsets" (win32, gtk, qt, carbon, cocoa, ...). A backend is compiled in by simply using the package LCL and adding the unit "interfaces" as one of the first units to your program. When you create an application with the Lazarus IDE this is done automatically. The backend is chosen at compile time and can not be changed at runtime.