Most current Linux distros have a suitable Qt5 in their standard repositories however, long term support releases have issues due to their age. Ubuntu 16.04 has QT5.5 that is too old and 18.04 ships a problematic version of libQt5Pas that needs to be replaced, see below. Nice howtoby forum user zoltanleo (suitable for qt6 also).

Note: if you are using a version of Lazarus later than 2.2.0 you (and your end users) will need libQt5Pas greater or equal to 1.2.10. It will take some time for the distributions to update the version they distribute, so either build your own or use the unofficial https://github.com/davidbannon/libqt5pas/releases/latest debs and rpms as mentioned below. Remember, your end users need 1.2.10 too !

Do I have a problem with the version ?

The version of libQt5Pas will cause concern to the following people, remember this affects you as a developer AND your end users.

Two options, use a deb or rpm from https://github.com/davidbannon/libqt5pas/releases/latest - you might need to ensure your Package Manager does not object or, even, replace your bright shiny new one with its preferred distro one. Shout out on the Forum if you need something other than just the 64bit debs and RPMs there (Signing, 32bit, Pacman etc). Install with, eg, sudo apt install ./libqt5pas1_2.10-0_amd64.deb <enter>. As a developer, you will also need the -dev package, remove an existing one if present.

Secondly, the Lazarus source has the code to build your own, you will need gcc and a few other things, documented in the README.txt. Then copy the new library over top of your existing libQt5Pas1 (as root of course) 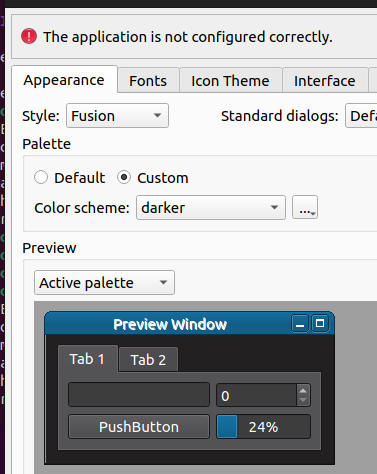 That may be added to the app's Desktop file or maybe you edit the menu entry. The alternative is to add it /etc/environment (obviously without the application's name) so it is automatically set for all apps, you need to logout and back in again. Adding an entry into your own .bashrc is not quite appropriate in that GUI apps started from the menu for example will not be told about it. Note: On Debian installing qt5ct automatically add QT_QPA_PLATFORMTHEME to environment variables.